Nassau County Executive Tom Suozzi, a practicing Catholic who came out against same-sex marriage in favor of civil unions in his primary for governor against Eliot Spitzer in 2006, came out swinging for marriage equality in the New York Times: 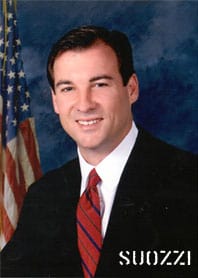 "I was wrong. I have listened to many well-reasoned and
well-intentioned arguments both for and against same-sex marriage. And
as I talked to gays and lesbians and heard their stories of pain,
discrimination and love, my platitudes about civil unions began to ring
hollow. I have struggled to find the solution that best serves the
common good. I now support same-sex marriage. This is a
subject of great debate before the New York State Legislature (although
the legislators there are a little distracted right now), and I hope
that same-sex civil marriage will be approved within the month…Many civil marriages are not considered 'holy matrimony' by
religious institutions because they do not conform to the rules of the
religious institution. Those marriages have not challenged religious
liberty. We must see that civil marriage, which has always been
separate from religious marriage, will remain so.But
most important, gays and lesbians have suffered too long from legal
discrimination, social marginalization and even violence. They are
entitled to clear recognition of their equal status as citizens of a
country that is founded on the principle that we are all inherently
worthy."

Previous Post: « Michael Phelps’ Pornstache Gives Him the Edge
Next Post: UCLA Undie Run: Do You Want to Tickle His Elmo? »