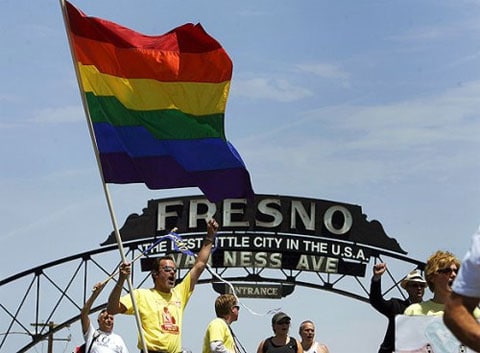 Thousands of gays and lesbians met in Fresno, California on Saturday for "Meet in the Middle 4 Equality", a march and rally for LGBT equality in reaction to the Supreme Court's decision on Proposition 8. 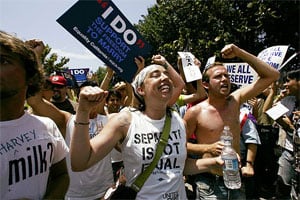 The L.A. Times reports: "Aiming to reach out to conservative voters, about 3,000 gay-rightssupporters gathered Saturday in California's Central Valley in arenewed campaign to win support for same-sex marriage. They staged the march in California's heartland to prominentlydemonstrate in a socially conservative region. Also, they wanted to pay"symbolic respect" to 1960s civil rights marches in places like Selma,Ala."

Said organizer Robin McGehee before the march: "You have got to reach into those communities that struggle to understand us."

The SF Chronicle reports: "Same-sex-marriage supporters weren't harassed or bothered Saturdayalong their route, and there weren't counter-demonstrations of anysize. The stray drag queens who milled about the crowd Saturday wereanomalies; most of the crowd was dressed for the weather, sportingnothing louder than the homemade T-shirt worn by 24-year-old KatePerry: 'Central Valley Grown Queer.'"

Said McCormack at the rally: "We are the gays they accepted. The straightest mostconservative people in the world would come up to me in Texas orwherever and say 'I never miss 'Will and Grace.' I hope that mypresence here, and the fact that I played that character for so manyyears, would make them realize there is a middle ground that is calledhumanity."

Gay marriage opponents rallied there as well, the following day: "Hundreds of people waived signs and rallied at Fresno City Hall onSunday to show support for the voter-approved ban on same-sex marriagein California, a day after thousands marched in the area against theban. People attending the rally wore T-shirts and held signs thatread 'Still standing in the middle for marriage,' as area religiousleaders and politicians spoke in support of Proposition 8, thevoter-approved measure that restricts nuptials to a union between a manand a woman."

Speakers, like former Fresno Alan Autry, were met with cries of "shame" by counter-protesters, reports the AP, who were yelled at to go home and read the Bible.

Several videos – a fantastic montage by Sean Chapin, as well as videos of speakers Robin McGehee, Dan Choi, Eric McCormack and Cleve Jones, AFTER THE JUMP…