Posters for Gay Pride Month hanging in 35 elevators at the Labor Dept. since June 22 have been "defaced or removed," the NYT reports. Labor Secretary Hilda Solis expressed anger over the damage: 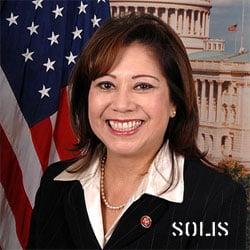 "In an e-mail message sent to the entire department, Ms. Solis, who helped found the House of Representative’s Lesbian Gay Bisexual Transgender Caucus when she was in Congress, said she was outraged by the behavior. 'It appears, however, that some members of the Labor Department
team have a different view, as it has come to my attention that most of
the posters have been continually defaced or removed,' Ms. Solis wrote. 'On several occasions, even the poster frames have been torn completely
off the elevator walls…I do not believe these actions represent the majority of our employees, so I refuse to let this situation define us.'
The posters will stay up throughout the month and will be replaced
immediately if they are damaged or removed, according to the letter.