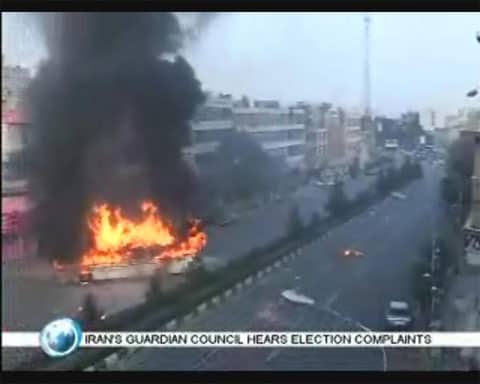 Don't miss Andrew Sullivan's live-blogging if you're interested in the events happening today in Iran. Women are being beaten and murdered by the Basij, reports of acid being dumped by helicopters.

Above, a photo of a passenger bus, burning in the street.

"The Iranian government must understand that the world is watching. We mourn each and every innocent life that is lost. We call on the Iranian government to stop all violent and unjust actions against its own people. The universal rights to assembly and free speech must be respected, and the United States stands with all who seek to exercise those rights.As I said in Cairo, suppressing ideas never succeeds in making them go away. The Iranian people will ultimately judge the actions of their own government. If the Iranian government seeks the respect of the international community, it must respect the dignity of its own people and govern through consent, not coercion.Martin Luther King once said – 'The arc of the moral universe is long, but it bends toward justice.' I believe that. The international community believes that. And right now, we are bearing witness to the Iranian peoples’ belief in that truth, and we will continue to bear witness."