A ruling could come today or early next week from the D.C. Board of Elections and Ethics regarding a proposed referendum opposing the D.C. Council's decision to recognize same-sex marriages performed elsewhere: 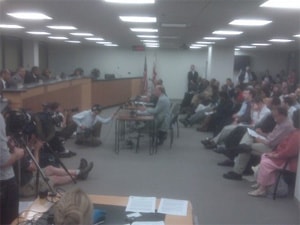 "The board – which currently has two members, Charles Lowery Jr. and
Chairman Errol R. Arthur, and one vacancy – was receiving public
comment on the issue through Thursday, meaning a decision may come as
early as Friday. A split decision would mean the referendum failed."

Yesterday, Attorney General Peter Nickles asked the Board to reject the referendum: "'The established public policy of the District is to treat
individuals as equals, whatever their gender, sexual orientation or
maritial status may be,' Nickles wrote. The legislation, set to go into effect in early July, is opposed by
a group of African-American ministers and same-sex marriage opponents.
Supporters of same-sex marriage argue a referendum would violate
elections law, which prohibits ballot initiatives on matters related to
the Human Rights Act."