At an American Constitution Society panel at its convention Friday night, White House staff secretary Lisa Brown and Biden Chief of Staff Ron Klain said they understood the "frustration" over the administration's sluggishness on LGBT rights. 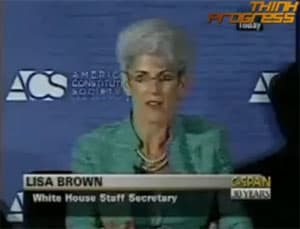 Said Klain: "I hope next year when we have this conference and that question gets asked, it doesn’t elicit the same kind of applause that it elicited this time — because I hope we have more progress, more things to show for. And I hope the kind of applause it elicits a year from now is applause about the accomplishments we’ve made and the progress we’ve made in the ensuing year."

Brown also said, regarding the DOMA brief, "There’s no question, personal statement, that there were some cites in there that should not have been in there."