Bill Clinton, who described his position on same-sex marriage as "evolving" during a stop on his speaking tour in May with former President George W. Bush, told a crowd at the Campus Progress National Conference in Washington,
DC, on July 8 that he is "basically in support" of it. 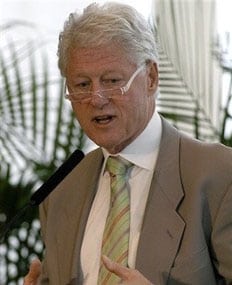 "In his most recent remarks on the
subject, Clinton said, 'I think all these states that do it should do
it.' The former president, however, added that he does not believe that
same-sex marriage is 'a federal question.'
Asked if he personally supported same-sex marriage, Clinton replied, 'Yeah.' 'I personally support people doing what they want to do,'
Clinton said. 'I think it's wrong for someone to stop someone else from
doing that [same-sex marriage].' The former president joins a string of prominent Democrats who have
recently switched their position on the issue, including former
Democratic National Committee chair Howard Dean, New York Senator
Charles E. Schumer, New Jersey Governor Jon Corzine and Connecticut
Senator Christopher Dodd."

While Clinton says he does not believe same-sex marriage is a federal question, the Defense of Marriage Act he signed into law as President in 1996 makes full marriage equality in the United States an impossibility by prohibiting federal recognition of said marriages. President Obama has promised to repeal DOMA.