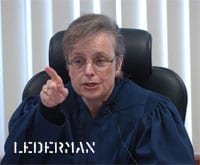 "Lederman has been removed from her 15-year post as top
administrative judge over Miami-Dade's juvenile courts. The new chief
justice over Miami courts says he wanted new perspectives and
leadership. Lederman ruled in November 2008 that Florida's gay
adoption ban was unconstitutional, a case now on appeal…The new top
judge in Miami's juvenile courts is Orlando Prescott. Lederman will
remain a juvenile court judge and says she respects the decision."

Lederman, described as "esteemed" by the Herald, "was abruptly stripped of her job as top judge at the Children's
Courthouse as the county's new chief judge moves to put his stamp on
the judiciary."

In a 53-page ruling, Lederman wrote: "It is clear that sexual orientation is not a predictor of a person's ability to parent." The ruling allowed Frank Martin Gill to move forward with adopting two brothers, ages 4 and 8, who had been in Gill's foster care since 2004.