Bishop James Stanton on the Episcopal Diocese of Dallas won't acknowledge a resolution passed at the recent General Convention of the church with regard to gay clergy and  the blessings of gay unions, the Dallas News reports: 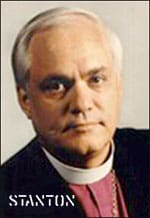 "The General
Convention passed a resolution noting that some states now allow gay
marriage, and calling on the denomination to 'develop theological and
liturgical resources' in response. The resolution stopped short of
authorizing rites for gay unions. The resolution does say that
bishops – particularly where gay marriage is legal – 'may provide
generous pastoral response' to all members. Stanton said such language appears to give a 'green light' to blessings of gay unions."