Emmy-winning director Todd Holland caused a stir at an Outfest panel over the weekend after advising actors who wants to succeed to remain in the closet: 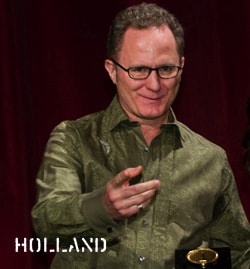 "Holland, who was talking as one of the featured panelists, and who once
worked as a director on the critically acclaimed HBO sit-com The Larry Sanders Show, explained that it's a necessary career choice if a gay actor wants to succeed in Hollywood. Fellow panelist and filmmaker Kirby Dick, director of Outrage,
a 2009 documentary about gay politicians who stay in the closet to
further their political careers, told Holland: "I know where you're
coming from, but it's a regressive argument." Holland, who was legally married before Proposition 8 was
passed by California voters in November, responded that he was just
being realistic, but Dick believed that if "an A-list actor came out,
it would have more impact on the culture than an A-list politician." No
one talked about the personal repercussions of a gay actor succeeding
in Hollywood by lying about his sexual orientation to the general
public."

Certainly one actor who would agree with Holland is Rupert Everett. Everett has continually blamed his lack of career momentum on his openness about his sexuality. Said Everett to Kevin Sessums in April: "There is just very little opportunity for a fag. That’s
the reality. There isn’t."

Note: an earlier draft of the L.A. Weekly article stated that Kirby Dick is a gay filmmaker. He is not gay. This has been corrected.