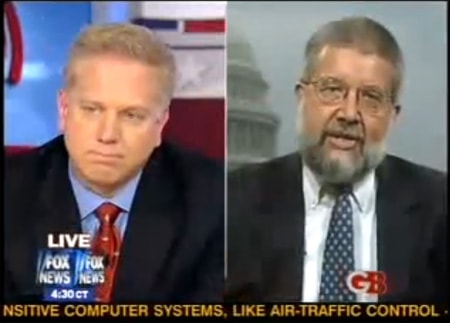 Glenn Beck nods his approval of guest Michael Scheuer's apparent request to Osama bin Laden for a major attack against the U.S. in order to protect it from immigrants:

"The only chance we have as a country right now is for Osama bin Laden to deploy and detonate a major weapon in the United States. Because it's going to take a grass-roots, bottom-up pressure, because these politicians prize their office, prize the praise of the media and the Europeans. It's an absurd situation again. Only Osama can execute an attack which will force Americans to demand that their government protect them effectively, consistently, and with as much violence as necessary."

Watch it, AFTER THE JUMP...

Previous Post: « Judge to Allow D.C. Recognition of Same-Sex Marriages to Go Ahead
Next Post: Hot + Cold: Andy Murray and Roger Federer Strip Down at Wimbledon »