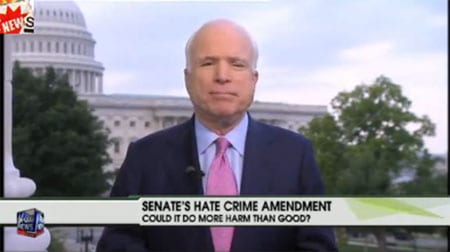 Senator John McCain today attacked the attachment of a federal hate crimes bill (The Matthew Shepard Act) to a Defense Dept. appropriations bill, calling it an "abuse of power." Never mind that such unrelated attachments are used commonly by both parties to pass legislation.

The Senate approved the hate crimes bill, but not before several amendments involving the death penalty were attached by Senator Jeff Sessions in an effort to derail it. Also, the Senate voted to strike funding for the F-22 fighter. Obama said he would veto any bill with funding for the F-22. The bill is now expected to go to a conference committee before final approval.

Here's how the senators voted on the hate crime bill.