Yesterday, Senator Kay Bailey Hutchison’s (R-TX) gubernatorial campaign website was discovered to be filled with a variety of hidden "metatags" intended to draw internet users from search engines, one of which referenced the current Texas governor: "Rick Perry gay". 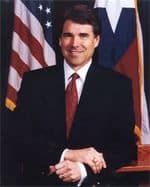 Naturally, the camp of the homophobic governor was outraged: "Perry spokesman Mark Miner said he hadn’t seen the site. Speaking before Sadosky said the hidden phrases would be removed,
Miner said: 'If they’re behind this, it’s outrageous. They should pull
it down immediately. It shows the depths they will seek for their own
political gain.'”

Hutchison's aides said they would remove the "gay" tags immediately, but not before labeling them "offensive".

Said Hutchison spokesman Jeff Sadosky: "We did not know these offensive word associations were being searched
for by hundreds of thousands of Texans everyday nor do we condone the
computer-generated existence on our Web site."

Think Progress writes: "Hutchison did not clarify what exactly she finds 'offensive' about the
phrase 'rick perry gay.' Is she offended by the very notion that her
state could be governed by a gay man, or does she simply find the word 'gay' itself to be offensive? In either event, her initial mistake was
nothing more than an innocent attempt to monitor search engines. Why
she felt the need to respond with anti-gay rhetoric is anyone’s guess."