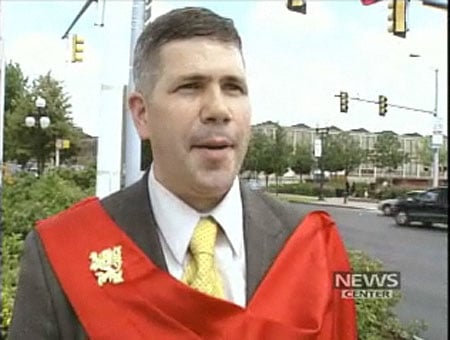 A Pennsylvania-based wingnut group that appreciates a fashion statement has traveled to Maine to campaign against marriage equality. Maine groups are currently battling a ballot measure that would overturn the state's recently passed marriage equality law. WCSH reports: 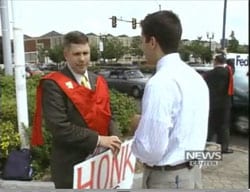 "The American Society for the Defense of Tradition, Family andProperty is based in Pennsylvania. This week the group is in Maine withsigns and handouts about marriage. The group says gay marriage is harmful to society because childrendo not have a mother and father. They also claim that marriagesperformed at City Hall, without God present, are not really marriages.However the group is not arguing that issue while in Maine."

Video report, AFTER THE JUMP…

So your marriages also mean nothing if you're straight and weren't married at a church.

Props on the fancy red sashes, however, PA dudes. They really project to the world what total whackjobs you are.