USA Today has posted a frightening piece about the ongoing executions of gays in Iraq by militias hungry to show signs that they are still powerful despite U.S. and Iraqi efforts to banish them. Says Mithal al-Alusi, a secular, liberal Sunni legislator: "Why did Hitler start with gays? They are weak. They have no political cover. They have no legal cover." 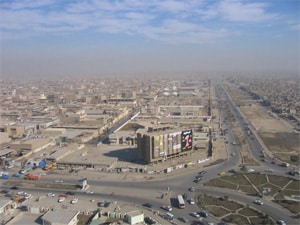 "The militias usually send out warnings before
they attack. Posters go up in Sadr City listing the offenders — gay and
flashy straight men — by name and neighborhood. 'If you don't give up
what you are doing,' said a recent one seen by a USA TODAY reporter, 'death will be your fate. And this warning will come true, and the
punishment will be worse and worse.' The poster referred to the offenders as 'puppies,' the fundamentalist epithet for gays here. 'In Arabic
culture, if you want to insult someone you call them a dog,' human
rights activist Yanar Mohammed says. 'If you're a small dog, you can
just be crushed.' Among those listed was a young man named Allawi
Hawar, a local soccer star who incurred the wrath of the militias by
wearing his hair long and partying with his friends in Sadr City cafes. Hawar was playing pool one day last month when
two masked men drove up on a motor scooter. One climbed off and made
his way inside the cafe, clutching a pistol. 'We have something to deal with,' he announced to startled patrons, according to witness Emad Saad, 25. The gunman grabbed Hawar and dragged him
outside. Then he shot the young athlete in the leg. After Hawar
crumpled to the ground, bleeding, the gunman shot him again and killed
him, Saad says. The militiamen pick their targets by entering
cafes and looking for men who appear feminine or too showy, Saad says.
Then they ask around to get the offenders' names, and later put them on
the death lists distributed around town."

Previous Post: « Mika Strips to His Boxers in ‘We Are Golden’ Video
Next Post: Towleroad Guide to the Tube #516 »