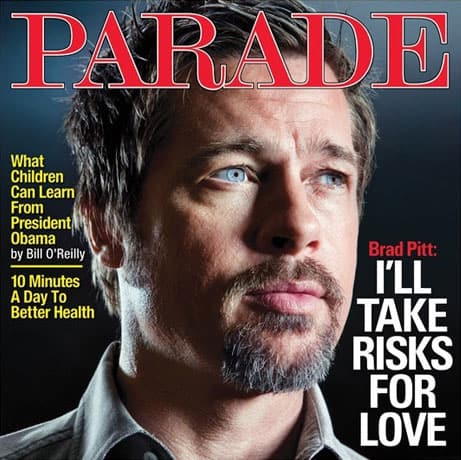 Brad Pitt holds forth in this week's Parade magazine on a variety of topics, which include same-sex marriage, spirituality, and bigotry. Here's what he had to say:

On Prop 8 and Marriage Equality:
"It's ridiculous that Prop 8 took away gay people's right to marry! I have no understanding of that kind of hatred. Maybe it's fear of difference or of the unknown. If you feel belittled, maybe you need someone else to belittle to feel powerful. It's the only way I know how to explain it. You've got religion telling you what to think about homosexuality, about marriage. They say homosexuality is a choice, a lifestyle, something you can be cured of, and that isn't true. But if you're tucked away and have no friends who are gay, you'll believe what the preachers say. Just think of it in terms of being in love–how would you feel if someone told you that you couldn't be with the person you loved?"

On the right to love:
"Man, I resent people telling others how to live! It drives me mental!
Just the other night, I heard this TV reverend say that Angie and I
were setting a bad example because we were living out of wedlock, and
people should not be duped by us! It made me laugh. What damn right
does anyone have to tell someone else how to live if they're not
hurting anyone? How many times do you think real love comes to someone
in a lifetime? If you're lucky, maybe two or three."

On bigotry:
"Why would anyone hate another race? Or hate Jews? Or gays? Maybe hatred is something that is passed on–like a kid who was beaten by his father and then grows up to beat his kid. It is the only way I would know how to explain it."

On his spirituality:
"I grew up in a Christian community and for me the positive thing was that once a week, on Sundays, we focused on bigger issues. But the negative to me is that it was very stifling in the end because it was about what you can't do. Now, Christians will argue, 'That's not true.' To me, I just found Christianity to be, 'Don't do this, don't do that.'"