Calling someone gay is not grounds for a defamation case, a New York judge ruled yesterday, with regard to a $60 million lawsuit brought by Howard K. Stern against author Rita Cosby over claims she made in her "tell-all" book about Anna Nicole Smith, Blond Ambition: The Untold Story Behind Anna Nicole Smith's Death. 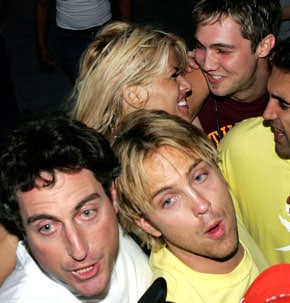 "Southern District of New York Judge Denny Chin said in a ruling
Wednesday that a 'veritable sea change in attitudes about
homosexuality' has led him to conclude that today the New York Court of
Appeals would not hold that calling someone a homosexual was defamation
per se. However, the judge also said that statements asserting homosexual conduct might be found by a jury to be defamatory in Stern v. Cosby, 07 Civ. 8536."

"[T]o the extent that courts previously relied on the criminality of
homosexual conduct in holding that a statement imputing homosexuality
subjects a person to contempt and ridicule … Lawrence has foreclosed such reliance," Chin said.

"Second, in 2009, the 'current of contemporary public opinion' does
not support the notion that New Yorkers view gays and lesbians as
shameful or odious," he said, citing the movement to legalize gay
marriage and a poll showing that gay marriage is favored by 51 percent
of New Yorkers and there was a two-thirds majority in favor of civil
unions.

"Finally, the New York Court of Appeals has not, in its most recent
opinion touching on social attitudes toward homosexuality, given any
indication that it perceives widespread disapproval of homosexuality in
New York," he said.

Chin did say, however, that allegations of homosexual acts were possibly grounds for defamation because they are "susceptible to a defamatory meaning." Chin reportedly allowed the case to proceed to trial on 11 of the 19 statements originally listed in the complaint, according to Stern's lawyer.

In December 2008, Cosby had motioned to dismiss the defamation claims.