Paul Sousa, a 22-year-old Cambridge, Mass. resident who will attend Boston College law school this fall, has launched a campaign urging Connecticut Attorney General Richard Blumenthal to follow the lead of Massachusetts AG Martha Coakley, and file a lawsuit against the Defense of Marriage Act (DOMA), the Hartford Courant reports: 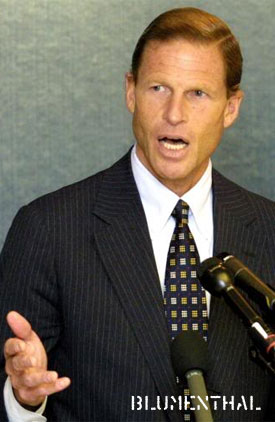 "Massachusetts was the first state in the nation to legalize gay marriage and the complaint, filed July 8 in U.S. District Court in Boston, contends that Congress "overstepped its authority, undermined states' efforts to recognize marriages between same-sex couples, and codified an animus towards gay and lesbian people.'…Sousa is using Facebook and other social media to encourage people to flood Blumenhal's office next week with calls and letters. He says he just launched the effort last week and already, more than 500 people have pledged to take part."

Said Sousa: "Since marriage equality is indeed the law in Connecticut, we strongly urge Attorney General Blumenthal to follow Massachusetts' lead and stand up for the citizens and laws of his state by filing a lawsuit against the discriminatory federal Defense Of Marriage Act. He hasn't shied away from provocative national cases in the past and hopefully he won't in this case. He's pretty liberal and progressive and he's a friend of the LBGT community."

Blumenthal is listening. He responded: "We are monitoring Massachusetts' action and listening to views and opinions expressed by advocates on all sides of the issue."

Marriage Equality is the law in Connecticut – Urge Blumenthal to Defend It! [facebook page]