Miami newsman Charles Perez, who was fired last week after filing a discrimination complaint with the Miami-Dade County Equal Opportunity Board against his former station WPLG, speaks out about the firing and the addition of a retaliation charge to the claim, in The Daily Beast. 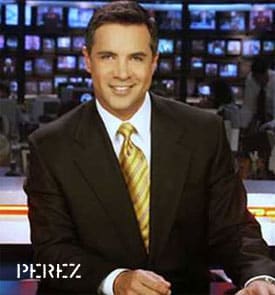 Perez also discusses the larger climate in mainstream news: "The news business has become a place of fear, where principle and the
news have become the casualties and ratings and dollars the prizes."

Says Perez: "I used to believe in my company, WPLG and The Washington Post (which owns Post-Newsweek Stations). Now, The Washington Post is embroiled in a scandal over selling dinner spots at the publisher’s dinner table, offering access to power in exchange for cash, and my own station told me to shut up, go to the back of the bus, and they won’t fire me.

So what do they stand for? It’s not clear. If anything has taken a back seat, it seems to be integrity.

One of my colleagues, a higher-up at the station, told me: 'The weekends will be better for you, anyway, Charles. You and Keith [my partner] want to have kids. It’s a lot less high-profile there.'
It was a suggestion that never would have been made to one of my straight colleagues, male or female. The only thing I could take from it was that my profile as a gay man, especially if I were to have kids and, God forbid, get married, would render me less promotable and less advertiser-friendly.

In fact, over the previous five months, I’d been told, 'Don’t get married, Charles. We don’t need that.' I’d also been told not to have children. In essence: 'You’re the main anchor and you’re gay, but let’s not push it.'

Perez says he is "relying on a new county ordinance, enacted last November, that added sexual orientation as a protected class" to support his complaint. He hopes that succeeding with his claim would help to expand state anti-discrimination laws and support ENDA.

Why I Committed Career Suicide [the daily beast]