A plan by the city of El Paso, Texas to extend domestic partner benefits to gay and unmarried heterosexual partners of city employees was the centerpiece of a contentious City Council meeting on Tuesday night attended by "25 pastors, churchgoers and self-described 'angry citizens'", according to the El Paso Times: 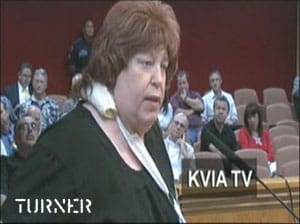 "Opponents of the plan, many quoting the Bible, spoke during the public portion of Tuesday's council meeting. Most
said the council's plan to extend domestic partner benefits to city
workers did not reflect the views of mainstream El Pasoans. 'You're opening up a Pandora's box,' said Tom Brown, pastor of Word of Life Church. Council
members last week voted 6-1, with Carl L. Robinson dissenting, to
include the benefits in the new city budget. Final approval of the
spending plan is scheduled for a vote Aug. 25."

Gays and lesbians and those who voted for the measure did have one vocal defender in resident Lisa Turner, who gave an impassioned speech at the microphone calling out the "preachers of hate" while many laughed at her.

Said Turner: "Their parishioners, these are the people who teach their kids, and
teach … (pauses) I'm sorry, I'm getting emotional. These are the
people in their church who say it's wrong and they teach this … this
is why an 11-year-old goes and hangs himself, because the children of
these ministers and people who go to the church have berated this
child, because he's perceived to be different, he's perceived to be
gay, and there's so much pressure the child hangs himself. And he's
11-years old. You tell me where in your Bible that's OK. It's not."

Watch it (and read the transcript) HERE. More videos here.