The Los Angeles Episcopalian Diocese nominated a gay man and a lesbian among six it put forward for election to Bishop in December, just a month after the Church voted to allow consecration of gay clergy, the L.A. Times reports: 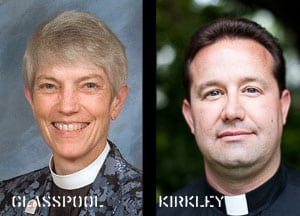 "The
nominations of the Rev. John L. Kirkley of San Francisco and the Rev.
Canon Mary D. Glasspool of Baltimore are likely to further inflame
theological conservatives in the U.S. church and their global partners
in the Anglican Communion, who have repeatedly warned about the
repercussions of such action. They are among six nominees who will face election in December for two
suffragan bishop positions at the Los Angeles diocese's annual
convention. Suffragan bishops assist a diocese's primary bishop. Home to 70,000 Episcopalians across six counties, the diocese is widely
regarded as one of the most liberal in the U.S. church of 2.1 million
members. Its bishop, the Rt. Rev. J. Jon Bruno, is an outspoken
advocate for the rights of gays in the church. 'I affirm each and every one of these candidates, and I am pleased with
the wide diversity they offer this diocese,' Bruno said in a statement
Sunday…Sunday's action in Los Angeles came a day after the Diocese of
Minnesota nominated three priests for bishop, including a partnered
lesbian, the Rev. Bonnie Perry. She is rector of All Saints' Episcopal
Church in Chicago and an adjunct professor at Seabury-Western
Theological Seminary in Evanston, Ill."

The move is predicted to fuel further division within the split Anglican Church.