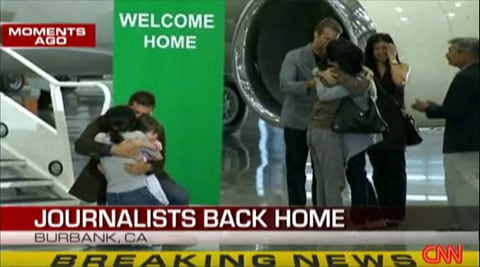 The plane carrying Bill Clinton and freed Current TV journalists Laura Ling and Euna Lee arrived in Burbank this morning and talked about their ordeal in North Korea, expressing deep gratitude to the strangers who supported them since they were seized in March.

Clinton secured the release of Ling and Lee yesterday. They had been sentenced to 12 years hard labor in North Korea in June. Ling told the crowd at the airport that she was surprised when she saw PResident Clinton but knew at that time that everything was going to be okay.

Video of the plane arrive and Laura Ling's remarks, AFTER THE JUMP…

Previous Post: « Victor Webster to Play Gay in Melrose Place Remake
Next Post: What Does Gerard Butler Know About a Gay Guy and a Cucumber? »