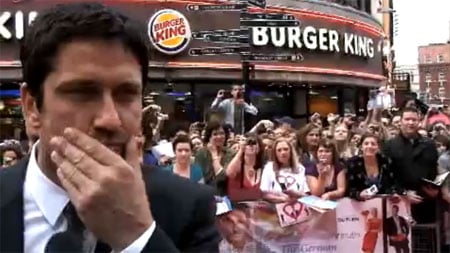 Via Back2Stonewall comes this clip of Gerard Butler telling news media at the premiere of his new movie The Ugly Truth that filmmaker Robert Luketic hired him because of a joke he told about a gay guy and a cucumber. 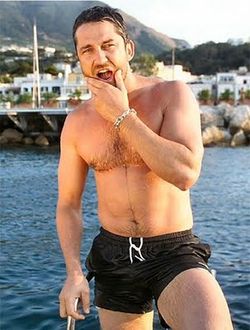 Says Butler: "A gay guy walks into a greengrocer and he says 'Can I have a cucumber please?' And the greengrocer says, 'Eh would you like that sliced?' Ha ha. 'What do you think I am, a slot machine?' It's not very funny. It's just that the way I said it."

If only Butler would demonstrate. An interesting interview recently resurfaced from a 2004 interview in Movieline, in which Butler discusses his bisexuality:

"One aspect of himself that he is not yet fully able comprehend is his sexuality. 'I talk about my sexuality,' he says, 'But it’s always glossed over. People seem to shy away from the issue. Whenever it is discussed, its distended and exaggerated. Gerard Butler is gay. No I’m not. I don’t know myself what I am so it can be bewildering to see that being plugged. I have been in relationships with women. And men. That doesn’t make me gay. That doesn’t make me straight. Its hard enough to go through these things in my mind without being scrutinised about it so there are times when you want to close the door and say my sexuality is my own personal business.'"

Watch the joke clip, AFTER THE JUMP…