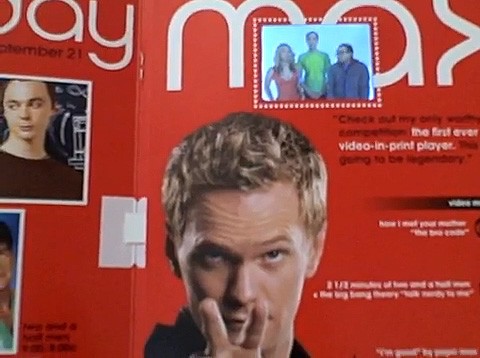 In the September 18 issue of Entertainment Weekly, CBS is running the first video ad to appear embedded in a print publication:

"The ad will be launched in partnership with PepsiCo to promote Pepsi Max soda and the TV network's Monday prime-time lineup. Not everyone will be seeing it: the ad will appear in a magazine insert sent to subscribers in the New York and Los Angeles areas–an edition without the video chip will be sent to subscribers elsewhere and show up on newsstands.The technology for the battery-powered ads was manufactured by a Los Angeles-based company called Americhip, and each ad can handle about 40 minutes of video."

The annoying thing about the ads is that they're made to get attention: they're reportedly autoplay and are quite loud when you open the publication.

More details on the technology here. Watch the ad in action, AFTER THE JUMP…

Previous Post: « Rush Limbaugh: Barney Frank Lives Around ‘Uranus’
Next Post: Each Time You Sleep with Someone, You Also Sleep with His Past »