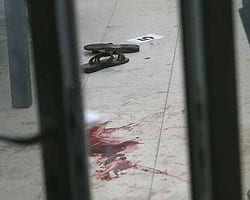 Police are still searching for the gunman, Haaretz reports: "On Tuesday afternoon, three detectives visited the
scene of the assault accompanied by a youth who was present at the time
of the shooting. He entered the community center with the detectives
and reenacted how he managed to escape when the gunman opened fire…The police also have the testimony of bystanders who
were near the center and managed to catch sight of the gunman for a few
seconds as he left the scene. According to one eyewitness, the killer
walked away hurriedly with his weapon still in his hand, and then
disappeared up one of the adjoining streets."

The shooter killed Nir Katz, 26, and Liz Trobishi, 16, and injured 15 others. Authorities are still uncertain about the motivation behind the killings.