After thousands signed a petition calling for a formal British apology to mathematician Alan Turing. During World War II, Turing, who is known as the father of moderncomputing, devised the Turing Bombe, a codebreaking device that wasused to decipher the Nazi enigma codes, up to 3,000 messages per day. He was also gay, and two years after being convicted of "grossindecency" and sentenced to undergo hormone therapy, he killed himselfwith a cyanide-laced apple. 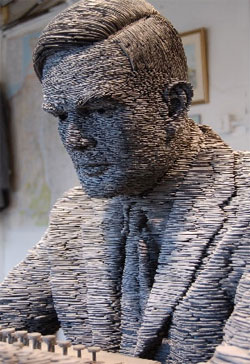 "Thousands of people have come together to demand justice for AlanTuring and recognition of the appalling way he was treated. WhileTuring was dealt with under the law of the time, and we can't put theclock back, his treatment was of course utterly unfair, and I ampleased to have the chance to say how deeply sorry I and we all are forwhat happened to him. Alan and the many thousands of other gay men whowere convicted, as he was convicted, under homophobic laws, weretreated terribly. Over the years, millions more lived in fear inconviction. I am proud that those days are gone and that in the past 12years this Government has done so much to make life fairer and moreequal for our LGBT community. This recognition of Alan's status as oneof Britain's most famous victims of homophobia is another step towardsequality, and long overdue…

…It is thanks to men and women who were totally committed to fighting fascism, people like Alan Turing, that the horrors of the Holocaust and of total war are part of Europe's history and not Europe's present. So on behalf of the British government, and all those who live freely thanks to Alan's work, I am very proud to say: we're sorry. You deserved so much better."

Pictured: a statue of Turing at Britain's Bletchley Park.

An excerpt of a documentary on Turing, AFTER THE JUMP…