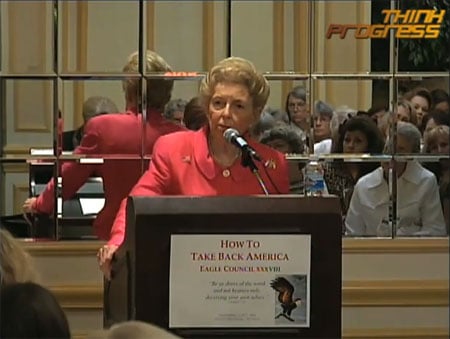 Phyllis Schlafly hosted a "How to Take Back America" conference in St. Louis over the weekend.

Topics discussed included "How To Counter The Homosexual ExtremistMovement," "How To Stop Socialism In Health Care" and "How To RecognizeLiving Under Nazis & Communists."

Who was there? "Among the prominent speakers who traveled to St. Louis for theconference were former Arkansas Gov. and GOP presidential candidateMike Huckabee, Republican Reps. Tom McClintock, Tom Price, Steve Kingand Michele Bachmann, and 'Joe the Plumber,' aka Samuel Wurzelbacher."

Anyway, Schlafly weighed in on the marriage debate to a roomful of Christian extremists: "My analysis is that the gays are about five percent of the attack on marriage in this country and the feminists are 95 percent."

Previous Post: « Gay Kiss-in Brings Shopping Center to Brief Standstill in Paris
Next Post: NYPD to Victim of Anti-Gay Attack: ‘It Has to Be Something Bigger’ »