The Huffington Post's Ryan Grim has published a trove of nuggets from the forthcoming book from former Bush speechwriter Matt Latimer, Speech-less: Tales of a White House Survivor

. Two I've lifted for this crowd: 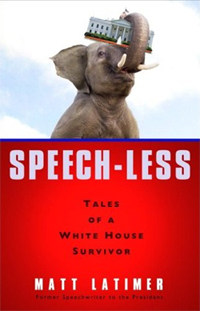 Bush, when told that Idaho Sen. Larry Craig had been the latest GOPer
to be caught in a sex scandal involving boys or men: "What is up with
all these Republicans?"

For a commencement address at Furman University in spring 2008, Ed
Gillespie wanted to insert a few lines condemning gay marriage. Bush
called the speech too "condemnatory" and said, "I'm not going to tell
some gay kid in the audience that he can't get married." (Of course,
Bush ran his 2004 campaign telling that kid just that.)

Here's the book's description, for those of you who haven't seen the TV pre-press: "As a young political geek, Matt Latimer dreamed of one day heading to
Washington to work for a conservative president and usher in another
Reagan Revolution. With the support of his slightly mortified liberal
parents, he tried to do just that — but his youthful exuberance began
to cool as he moved up the rungs of power. On Capitol Hill he worked
for a Congressman who “misremembered” basic facts, assisted a U.S.
Senator who hid from his own staff, and met another who cowed her male
aides into carrying her purse. Finally ensconced in the White House as
one of George W. Bush’s chief speechwriters, he soon realized that the
post wasn’t at all what he’d envisioned. Less like Aaron Sorkin’s 'The
West Wing' and more like NBC’s 'The Office,' D.C.’s most prestigious
address turned out to be a bizarro world in which the major players
were in some ways mirror opposites of their public images.
Read more at: http://www.huffingtonpost.com/2009/09/20/bush-in-2008-im-not-going_n_292876.html