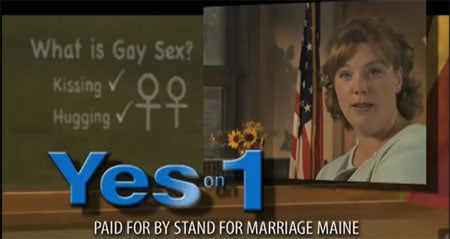 Stand for Marriage Maine has just released its latest false and fear-mongering ad in the "Yes on 1" campaign, warning voters that kids will learn about gay sex if marriage equality is passed in the state.

There's no doubt some Maine kids will see this ad when it is broadcast on TV. If Stand for Marriage Maine is so concerned about kids learning about gay sex, why are they inspiring curiosity about it by broadcasting this commercial?

Here's some info on the teacher in the ad, from Good As You.

Stand for Marriage Maine also responded to Attorney General Janet Mills' letter assuring that marriage equality would have no bearing on Maine curricula, calling it a classic straw man argument.

Said Chairman Marc Mutty: "It was a foregone conclusion that the Attorney General, an ardentsupporter of same-sex marriage, has taken the position that there willbe no change in public school curricula if Question 1 fails and LD 1020takes effect. Ms. Mills has long supported LD 1020, the gaymarriage legislation. Nearly a week before she released her opinion,she told a local television reporter that she was 'appalled' by ourads, which do nothing more than point out the real consequences toschool children and parents if a new legal definition of 'any two willdo' marriage replaces the union between a man and a woman."