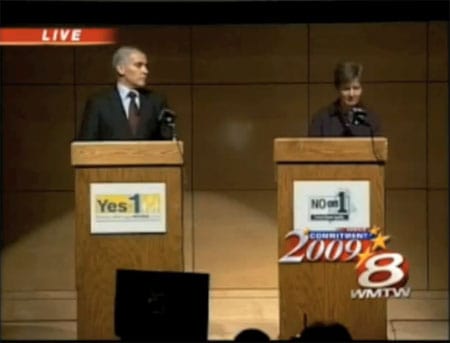 A televised debate on marriage equality was held in Portland, Maine last night:

"Before the formal debate inside, people on both sides rallied outside.Dwight Sholes, who has been in a same-sex relationship for 12 years, made it clear why a no on one vote is so important to him.' We're simply saying we want what everybody else has, it's nothing dramatic, there is nothing radical about it,' said Shoales. 'It's about fairness and live and let live, I don't understand why people would be opposed to that.'Wayne Burke says he understands because he is opposed to same-sex marriage and came to the campus to push yes on one.Burke said 'it redirects Maine's values and mores, they're changing everyday and this is a big step, one where we'll have to deal with consequences.'Inside at the debate, official representatives from both campaigns laid out their viewpoints in an hour long back and forth."

One question from the debate, on what's next for both sides, depending on the outcome,
AFTER THE JUMP…

(via Good As You)