In a vote this morning, the Lutheran Church of Sweden approved wedding ceremonies for gay couples: 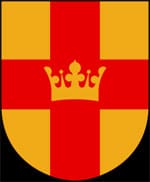 "The decision, which is based on a proposal from the church’s governing board, means that the Church of Sweden will conduct wedding ceremonies for both heterosexual and homosexual couples.

The proposal was approved by 176 of 249 voting members.

The decision comes just three days after the 30th anniversary of the date when homosexuality stopped being classified as a disease in Sweden. 'The Synod’s decision takes a stance in favour of an inclusive view of people. Regardless of whether one is religious or not, this affects the entire social climate and the view of people’s equal value,' Åsa Regnér, head of the Swedish Association for Sexuality Education (RFSU) – the country's largest gay rights group, said in a statement."

The church has offered gay couples religious blessings of their unions since 2007.

Sweden began recognizing same-sex marriage following a vote by parliament in April. The law went into effect a month later.

Previous Post: « Man Arrested for Indecent Exposure in His Own Home After Making Coffee in the Nude
Next Post: Air Force Sun »