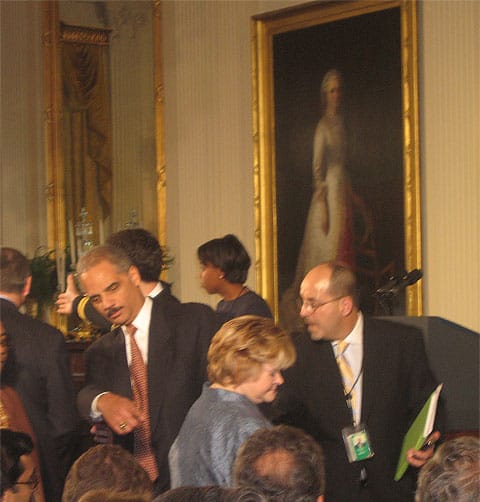 I just left the signing of the Department of Defense Authorization bill, to which the the inclusive hate-crimes bill was attached. It was a very moving occasion and I'll have a post later reflecting on this historic day for the LGBT community, but for now some remarks from Attorney General Eric Holder. I took the (blurry, apologies) photo above of Holder, Judy Shepard, and White House Office of Public Engagement Deputy Director Brian Bond just before the ceremony.

Holder made himself available just after the event and was asked a few questions. I was able to ask him to clarify his recent weak remarks on Question 1 in Maine, but unfortunately Holder said he was not familiar with the ballot measure.

Said Holder: "I think this is the next great civil rights bill. We have after ten, twelve years finally come to recognize that federal law should apply, as the President said, to all Americans. This is a great tool for the Justice Department and will I think significantly improve the quality of life for people with disabilities, for women and for gay and lesbian Americans. This is a great, great day and too long coming."

A follow-up was asked about what actions the Justice Department's civil rights division can take tomorrow that they couldn't take today on hate crimes.

Answered Holder: "We can give assistance to state and local prosecutors who will investigate the vast majority of these crimes and in those instances where they don't have the ability to or desire, we can now prosecute these crimes and we could not do that thirty minutes ago. Now we can."

Recalling Holder's recent appearance in Maine at which he was asked about Question 1 and surprisingly refused to take a stand, I wanted to see if he had any clarification, so I asked him, "You were in Maine earlier this week and were asked about Question 1, which would take away same-sex marriage. You didn't comment on it at the time but would you like to clarify?"

Said Holder: "Well, what I said was that the President has indicated and I personally favor of the repeal of the Defense of Marriage Act and that is something we are working to do."

I replied, "And the referendum in Maine — would you like to speak further on that?"

Holder's answer? "I don't really know enough about the referendum over there to comment."