Two of Maine's largest newspapers threw their support behind marriage equality in the state in editorials over the weekend. 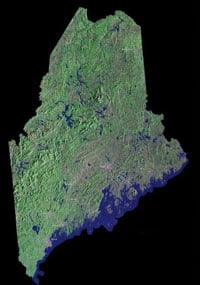 "Maine statutes use the word 'spouse' 400 times. They use the word 'marital' 600 times. There is virtually no way to surgically carve outand tie together all the rights and responsibilities of marriage in alegal relationship that does what marriage does without calling itmarriage. There is also no way to provide the universally understood familystatus that comes with a marriage contract. Husbands and wives don'tneed to produce durable powers of attorney or advance directives whenthey pick up their children from school, visit a hospital room or makedecisions at a funeral home. Only same-sex couples are required to produce documents and jumpthrough these legal hoops, and that is not what the equal protectionclause in the state constitution promises. Families led by same-sex partners are here now. They are part of ourcommunities and they need and deserve the legal protections – as wellas the dignity – that comes with civil marriage status. Maine voters should recognize that even if their personal beliefsabout marriage haven't changed, reality has. They should accept realityand vote "no" on Question 1."

And the Bangor Daily News: 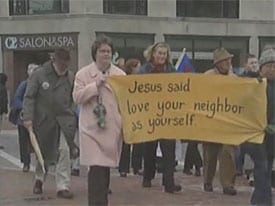 "Maine was unusual in passing a law to allow same-sex marriage ratherthan being required to do so by a court order. Since then, Vermont andNew Hampshire have followed suit. Lawmakers, including Gov. John Baldacci — the first governor to signsuch legislation into law — moved Maine toward tolerance and fairness.Repealing this law would move the state backward while denyingguaranteed rights to a small minority…It is hard to see how allowing more people to marry will weakenmarriage. Instead, it seems the strong desire of gay and lesbiancouples to be married, rather than declared domestic partners, showsthe value and importance of marriage. Voting no on Question 1 will reiterate Maine's commitment toequality and acceptance of families of all types while respectingreligious traditions and beliefs."

You can help Protect Maine Equality here. You can also help get out the early vote by assisting with the virtual phonebank.

Mainers in support of marriage equality held a rally in downtown Portland on Sunday. Check it out, AFTER THE JUMP…