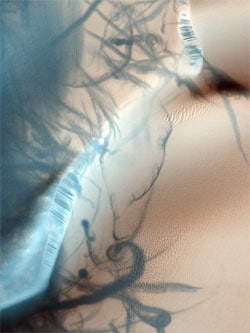 The surface of Mars as revealed by orbiter.

Purdue students protest professor Bert Chapman's blog post arguing the "economic case against homosexuality". Chapman: "As a conservative Christian, I firmly believe the homosexual lifestyle
is morally wrong, and my blog posting sought to emphasize there are
economic and public policy implications to widespread and open
acceptance of this lifestyle."

10-year-old refuses to say Pledge of Allegiance until there is liberty and justice for gays.

Marriage equality in Connecticut one year later: "Fully half of the gay and lesbian couples who wed in Connecticut were from other states or other countries. They came from South Dakota, Mississippi, Russia, Hawaii, Costa Rica and Israel, among other far-flung locales.

But above all, they came from New York: 455 Empire State couples traveled to Connecticut to marry." 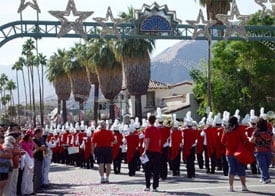 Human Rights Campaign throws support behind Kirsten Gillibrand: "From her personal lobbying of the New York legislature in support of marriage rights to helping garner support for a Senate hearing on repealing 'Don’t Ask, Don’t Tell,' Gillibrand has time and again stood for fairness for all."

Remember the homoerotic Cheesecake Factory hazings from July 2008? The case has been settled, in the amount of $345,000.

And he only gets better with age. 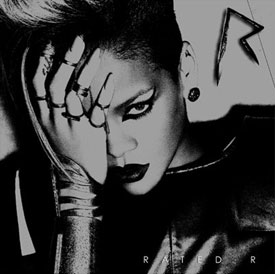 Gore Vidal: a life in pictures.

Reverend Donnie McClurkin goes off on gays: ""God did not call
young people to such perversion. Society has failed him, his church has
failed him … I would be homosexual to this day if Jesus hadn't
delivered."

Title and summary for Prop 8 repeal ballot language to be released next week: "As soon as the approval is given, the Restore Equality 2010 campaign will have 150 days to collect approximately 700,000 valid pen and ink signatures by voters registered in California. To account for the invalid signatures that are bound to show up on the forms, the Restore Equality 2010 campaign is aiming to collect 1 million signatures within the 150 day timeframe."