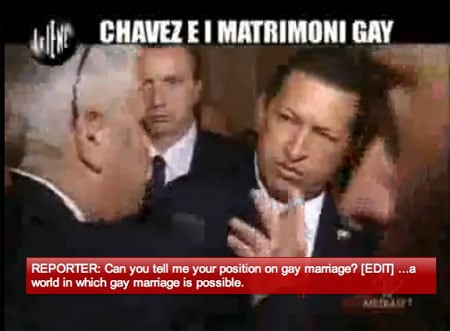 In an interview conducted at the Venice Film Festival in September, Venezuelan President Hugo Chavez is asked his thoughts on marriage equality.

Answers Chavez, in a series of questions: "I believe that… look, each country has its customs, no? At least, inVenezuela, it is not well-regarded, no? But there are societies, thereare societies, there are ideas which continue to mature [EDIT] …whatI am indeed against is any persecution against anyone based on sexualorientations…Now, [as far as gay marriage]… The same as Venezuelans, as the majority of Venezuelans, those of us who don't see it as being good…it's a state of opinion, it's a state of opinion. Which doesn't mean weare in opposition, that I am in opposition of what you might think."

Translation by Andres Duques at Blabbeando, who dug up the rare clip. Duques notes that Chavez' responses have been truncated as the interview is edited: "All in all, Chavez admits a couple of things: 1) He thinks that beinggay is a 'sexual orientation' instead of being an identity; 2)Interestingly, he thinks that marriage equality is a symbol of a'mature' society and yet he sides with the Venezuelan population thatbelieves marriage equality is wrong, and; 3) He says that he is againstpersecution against anyone based on sexual orientation."