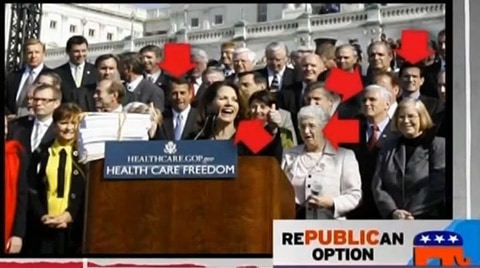 Writes Dana Milbank in the WaPo:

"Many of the demonstrators chanted 'Weasel Queen,' their pet name for the speaker of the House. Others wore masks of Pelosi (D-Calif.) and Senate Majority Leader Harry Reid (D-Nev.); they were covered in fake blood and carrying dolls representing aborted fetuses, as the Grim Reaper led them in chains to hell.In the front of the protest, a sign showed President Obama in white coat, his face painted to look like the Joker. The sign, visible to the lawmakers as they looked into the cameras, carried a plea to 'Stop Obamunism.' A few steps farther was the guy holding a sign announcing 'Obama takes his orders from the Rothchilds' [sic], accusing Obama of being part of a Jewish plot to introduce the antichrist.But the best of Bachmann's recruits were a few rows into the crowd, holding aloft a pair of 5-by-8-foot banners proclaiming 'National Socialist Healthcare, Dachau, Germany, 1945.' Both banners showed close-up photographs of Holocaust victims, many of them children…Now, objecting to the health-care bill is one thing. But doesn't itsend the wrong message for House Republicans to hold an event on theCapitol grounds full of hateful and gruesome words and images?"