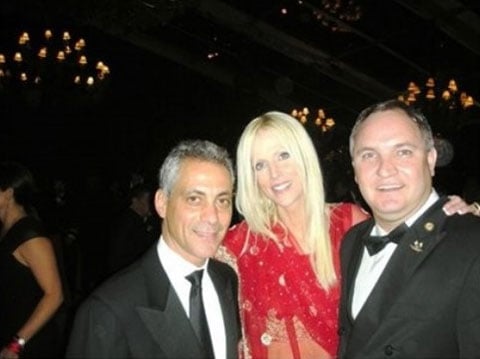 The White House is under scrutiny for a security breach by two party crashers at Tuesday's state dinner for the Indian Prime Minister. Tareq and Michaele Salahi, two reality stars appearing in the forthcoming The Real Housewives of Washington, attended the dinner though they were uninvited, somehow making it through security before hobnobbing with guests. They displayed evidence of their attendance later on Facebook. 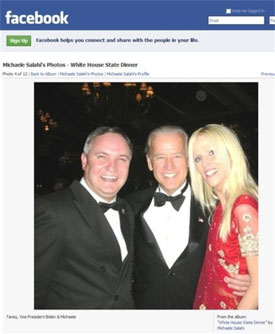 "The Salahis, both in their 40s, showed up about halfway through the guest arrivals. A Marine announced their names, and the couple — he in a tux, she in a striking red and gold lehenga (traditional Indian formalwear) — swept pass reporters and photographers, stopping several times to pose for pictures. They then walked into the White House lower hallway, where they mingled with guests on the red carpet before heading up to the cocktail reception in the East Room.Later, they posted pictures that seem to chart their course through the night: Michaele posing with Marines outside near the White House doors, and with Katie Couric and Rep. Ed Royce (R-Calif.) inside the mansion. In the East Room, the Salahis both cozied up to D.C. Mayor Adrian Fenty and his wife, Michelle.But the best was yet to come: Once inside the dinner tent, they got pictures that appeared to show them with ABC's Robin Roberts, Bollywood composer AR Rahman, PepsiCo CEO Indra Nooyi, Obama Chief of Staff Emanuel (identified as "Ron" in the couple's Facebook photo caption) and two with a grinning vice president. The photos end there — no shots of the Salahis sitting at a table, their seatmates or the post-dinner entertainment."

Watch CNN's report on the breach, AFTER THE JUMP…