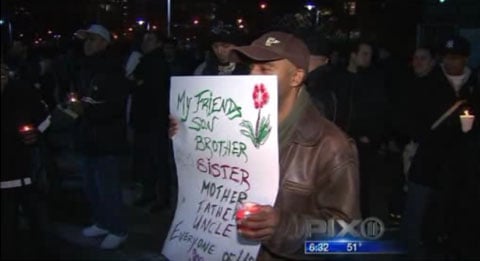 Thousands attended a vigil last night at Pier 46 on the edge of New York's West Village. Similar vigils took place in cities around the country in response to the murder of Puerto Rican gay teen Jorge Steven Lopez Mercado. Last weekend thedecapitated, dismembered, and partially charred body of gay teen JorgeSteven LopezMercado was found by the side of a road in Puerto Rico. The policeinvestigator suggested that he deserved what he got because of the"type of lifestyle" he was leading. Juan Martinez Matos has been charged with first-degree murder for Mercado's death.

Watch a news report and video from New York City, and a wrap-up of San Francisco's event, from Sean Chapin, AFTER THE JUMP…