Vallejo's faith-based community faced off against the LGBT community and supporters in vocal protests last night at the City Council meeting.  LGBT activists had planned a demonstration in response to Mayor Osby Davis' recent remarks to the New York Times. 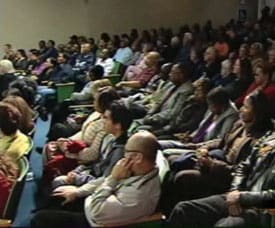 "They’re committing sin and that sin will keep them out of heaven. But you don’t hate the person. You hate the sin that theycommit."

When the faith-based community heard about the demonstration, ABC7 reports, they came out in force to defend the mayor. Watch a report, AFTER THE JUMP…

KTVU reports: "Of the hundreds gathered at city hall, some supported the mayor's right to his personal opinion while others were making a stand against what they called hurtful comments.The debate over religion, homosexuality and what public officials should and shouldn't say led to heated exchanges well before Tuesday night's city council meeting even began.Outside city hall were members of Vallejo's gay and lesbian community. They rallied against what they call Mayor Davis' oppressive and homophobic speech. 'I've lived in Vallejo for 25 years and now. He's asking me to go back in the closet and I will not do that,' said local resident Wendell Quigley.Inside city hall were members of the city's faith community. They prayed that the mayor's remarks wouldn't further divide Vallejo and called for the people of the town to come together. 'We don't stand at the door and ask ‘Are you gay? Are you lesbian?' said Rev. David Miller of the Kyles Temple AME Zion Church. 'I believe we preach to everybody, regardless of your faith, your background or your circumstances.'"

Meanwhile, the NYT released audio of the interview with Davis because the mayor had claimed his comments were presented out of context: "In the interview Davis said that as a Christian he disagrees with homosexuality, but 'loves' and 'prays' for gays to see the 'error in their ways.' He also says that he has 'very close friends' who are gay, and cited Council member Michael Wilson as one of them."

Listen to the audio below.

Previous Post: « NOM to D.C. Council: The People of D.C. ‘Have a God-Given Right to Vote for Marriage’
Next Post: First Black Lesbian State Legislator Elected in Georgia »