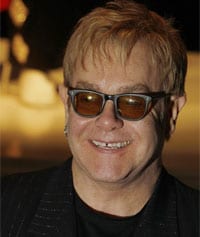 Elton John is reportedly working on an album of dance music.

Spinner reports:  "Proving that you're never too old to hit the dancefloor, it has been revealed Sir Elton John is set to release an album of dance music after working with Australian producers P'Nau.Best known for their work with Empire of the Sun, the production team are set to move Sir Elton into totally uncharted territory and in the process have sparked a furious bidding war between labels eager to release the material.A source close to the singer told the Sun: 'Elton says he's writing his most exciting new stuff for years — possibly decades. Working with P'Nau has got the creative juices flowing again. They have got a load of big companies sniffing around.'"

Empire of the Sun's "Walking on a Dream", AFTER THE JUMP…