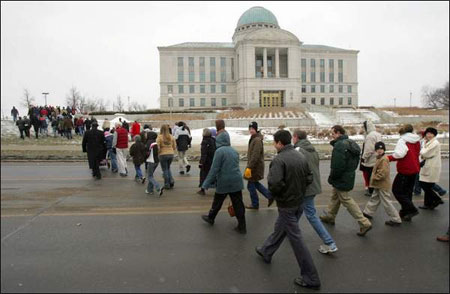 In a demonstration reminiscent of the one staged last January 17th (above) before the Iowa Supreme Court, Iowa bigots are reportedly set to "push hard…for a vote on a constitutional amendment that would ban same-sex unions" next month:

"Bryan English of Iowa Family Policy Council ACTION says pro-marriage
supporters plan to be at the state Capitol en masse on Jan. 12 when
Gov. Chet Culver delivers his Condition of the State address to a joint
session of the General Assembly with Iowa Supreme Court justices
present. He says the occasion will mark the first time that all three
branches of state government are together since a unanimous Supreme
Court ruled April 3 that a state law defining marriage as between one
man and one woman was unconstitutional, clearing the way for same-sex
marriages in Iowa."