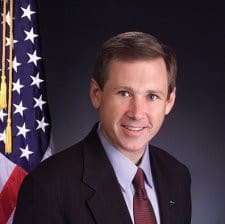 "Andy Martin, a conservative public interest lawyer, put out a spot on local radio in which he pushes a 'solid rumor' that fellow Senatorial aspirant, Rep. Mark Kirk (R-Ill.), 'is a homosexual.' … 'I helped expose many of Barack Obama's lies in 2008,' the ad goes. 'Today, I am fighting for the facts about Mark Kirk. Illinois Republican leader Jack Roeser says there is a 'solid rumor that Kirk is a homosexual.' Roeser suggests that Kirk is part of a Republican Party homosexual club. Lake County Illinois Republican leader Ray True says Kirk has surrounded himself with homosexuals.' … 'Mark Kirk should tell Republican voters the truth.'

The seedy spot seems to take a page out the Karl Rove playbook — in which allegations of homosexuality are pushed by innuendo and 'simple demands for the truth.' In a statement to a local Illinois station, the Kirk camp vehemently condemned and denied its content.' The ad is not true and is demeaning to the political process. The people of Illinois deserve better,' said Kirk campaign manager Eric Elk in a written statement."