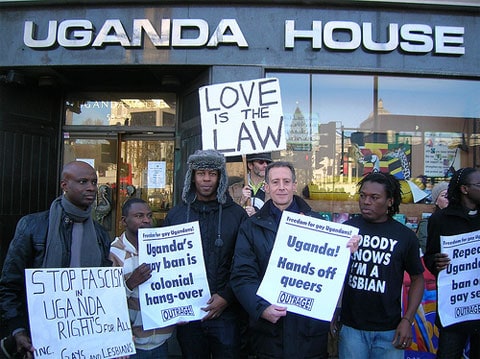 The activist group Outrage! held a protest outside the Ugandan Embassy in London yesterday.

Peter Tatchell of Outrage! reports: "The keynote speakers were gay Ugandan John Bosco and straight Ugandan human rights activist, Michael Senyonjo.John Bosco was recently jailed in Uganda, after he was illegally and forcibly returned to Uganda by the British Home office while seeking asylum in the UK.He condemned the Anti-Homosexuality Bill as 'an attack on the civil liberties of all Ugandans,' denouncing it as 'dividing Ugandans against each other and requiring people to report on their own family members who are gay.'Michael Senyonjo told the crowd:' In the last five years we have seen Idi Amin return to Uganda and his name is (President) Yoweri Museveni. We cannot allow fascism to return to Uganda. He should leave power and go because he is not taking the country anywhere but to disaster,' he said." 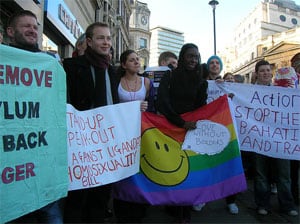 Added Tatchell:"President Museveni is fast becoming the Robert Mugabe of Uganda and that's a threat to the civil rights of every Ugandan person – gay or straight….There's a huge ground swell of public opinion that this bill goes way too far. Even people who say they're against homosexuality say this bill is excessive and a threat to the human rights of all Ugandans.The Ugandan government should drop this law and abide by international human rights legislation. The Anti-Homosexuality Bill violates the equality and non-discrimination clauses of the African Charter on Human and People's Rights, the International Covenant on Civil and Political Rights and the Universal Declaration of Human Rights. We are merely asking Uganda to uphold international human rights law. This homophobic legislation undermines the right to privacy and individual liberty and thereby sets a dangerous legal precedent which threatens the human rights of all Ugandans. It is part of a wider drift towards an authoritarian state."

CNN reported on the protest as well.

Photos by Brett Lock of Outrage!

A few of the speakers at the protest, AFTER THE JUMP…