Late last night, the New York Assembly passed the marriage equality bill again (it was passed once before this year, in May), the Empire State Pride Agenda reports in a release: 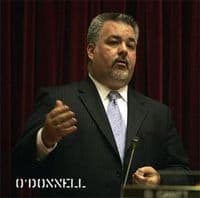 "Just a few moments ago, the New York State Assembly passed marriage equality legislation for the second time this year in a bipartisan vote of 86 to 51. By taking a vote in what is called an 'extraordinary session,' the Assembly has removed any obstacle to the bill being sent to the Governor for his signature if the Senate votes on the bill when it reconvenes tomorrow to conduct business.

The Pride Agenda gives special thanks to the New York State Assembly, under the leadership of Speaker Sheldon Silver, that has now voted and passed the marriage equality bill three times. Our thanks also to the legislation’s prime sponsor Assemblymember Danny O’Donnell for leading the successful effort again on the floor.

It is anticipated that forces opposing marriage equality may be coming to Albany tomorrow to put pressure on the State Senate to take no action on the bill. We continue to expect the Senate to give this issue the respectful debate and vote it deserves."

The Senate reconvenes at 10am.