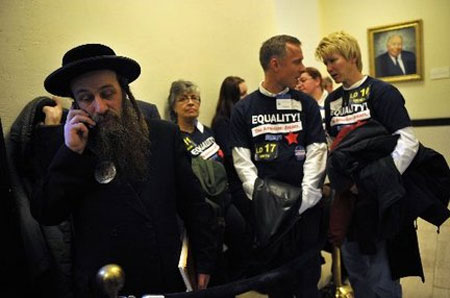 The Marriage equality focus shifts to New Jersey this week, with today's debate and vote in the Senate Judiciary Committee. It's expected to pass and go to the full Senate for a vote on Thursday. The Judiciary Committee hearing was scheduled to begin at 1 pm. Above, via the Star-Ledger, people lining up outside the statehouse committee room.

A 13-year-old from Maplewood, NJ is scheduled to testify – read her testimony here.

The NYT reports: "At a ballroom in the Trenton Marriott, hundreds of people — many wearing T-shirts bearing the slogan 'Equity The American Dream' — gathered for a morning rally in favor of the measure, which was scheduled for debate and a vote Monday before the Senate Judiciary Committee. Steven Goldstein, executive director Garden State Equality, one of the groups leading the effort to legalize same-sex marriage, said lawmakers had the historic opportunity to end a form of discrimination against gays by voting to allow New Jersey to join five other states that now allow gay couples to marry.Opponents of gay marriage came out in force, as well. John Tomicki, a leader of the Coalition to Preserve and Protect Marriage, said hundreds of volunteers were in Trenton on Monday to lobby against the bill and had gathered more than 300,000 signatures on petitions urging the Legislature to reject the measure."

The Star-Ledger looks at marriage equality's "unstoppable march": "To get a glimpse of where history is headed on gay marriage, consider the split in the Rice family of Newark.The son, Ron Rice Jr., a city councilman, was among 2,800 Democratic leaders and activists who signed a petition last week telling legislators that marriage equality is a fundamental human right.The father, state Sen. Ron Rice Sr., immediately issued an e-mail alert telling the world he should not be confused with his son. He will oppose the gay marriage bill in the Senate this week."

The Daily Record reports on a Morristown Church that's headed to Trenton for the hearing: "The Rev. Alison B. Miller will travel with Kathy Brown, the church's director of religious education, to Trenton for a rally organized by Garden State Equality. State Sen. Ray Lesniak, D-Union, said Thursday that the Judiciary Committee will take up the issue on Monday. The group is encouraging people to attend the Judiciary Committee hearing to serve as public witnesses to support "marriage equality" legislation."

Watch a report on the vote this week from FOX NY, AFTER THE JUMP…