More on the election of openly lesbian bishop suffragan of the Episcopal Diocese of Los Angeles Mary Glasspool over the weekend. 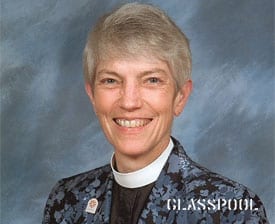 Said Glasspool: "I'm very excited about the future of the whole Episcopal Church and I
see the Diocese of Los Angeles leading the way into that future. But
for just for this moment, let me say again, thank you, and thanks be to
our loving and supporting God, a surprising God."

The L.A. Times reports: "Today, as he announced the vote that gave Glasspool a majority, Los
Angeles Episcopal Bishop J. Jon Bruno's voice choked with emotion. Then
he joked that someone had asked whether he could work with two women as
his suffragan bishops. 'I have to tell you I was born from a mother’s
womb and I’ve been taking orders from women ever since,' he said,
adding, 'I can assure you I can work with two women.'  After her election, Glasspool was surrounded by supporters, both gay and straight. Several wept as they embraced her." 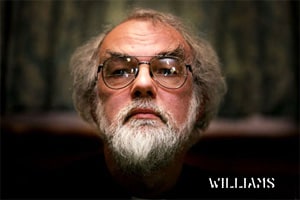 The Archbishop of Canterbury Rowan Williams is concerned about the election of Glasspool: "In a statement posted on his website Dr Williams said the election 'raises very serious questions not just for the Episcopal Church and its place in the Anglican Communion, but for the Communion as a whole'. … 'The process of selection however is only part complete,' he said. 'The election has to be confirmed, or could be rejected, by diocesan bishops and diocesan standing committees. That decision will have very important implications.'

Bishops of the US Episcopal Church voted in July to overturn a three-year ban on the appointment of gay bishops.

Anglican leaders had asked the Church to observe the moratorium. 'The bishops of the Communion have collectively acknowledged that a period of gracious restraint in respect of actions which are contrary to the mind of the Communion is necessary if our bonds of mutual affection are to hold,' said Dr Williams."

"In response to public pressure, Williams’ office said three days ago (3 December) that 'attempts to publicly influence either the local church or political opinion in Uganda would be divisive and counter productive. Our contacts, at both national and diocesan level, with the local church will therefore remain intensive but private'.

While most accept the Archbishop’s sincerity in opposing the Ugandan legislation, many suggest that he is being naïve about his tactics and giving the impression that Christian leaders will not speak up for gay people’s human rights. His decision to question Glasspool’s appointment, while saying nothing on Uganda, is likely to fuel such criticisms."