The Bay Area Reporter published some interesting information about Frank Schubert, who ran both California's "Yes on 8" campaign and Maine's "Yes on 1" campaign, which succeeded in yanking marriage rights from millions of gays and lesbians. 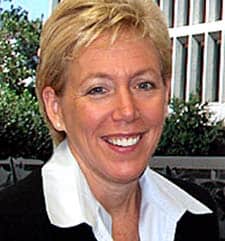 Schubert's sister is a lesbian, and she's running for a judgeship in Sacramento County:

"Because I am running for a judicial seat, I am bound
by the California Code of Judicial Ethics. This code applies to both sitting
judges and attorneys running for judicial office. This code makes it clear that 'Candidates may not make
statements that commit the candidate with respect to cases, controversies, or issues
that could come before the courts.' This code also states, 'Judges involved in
judicial campaigns must also avoid comment concerning a matter pending or
impending in any court.' In all honesty, I do not
believe it would be appropriate for me to give you my personal opinion on Prop
8."

Amazing how folks like NY Senator Ruben Diaz Sr., who has two gay brothers, and Frank Schubert can work so relentlessly to remove rights from those to whom they are closest.