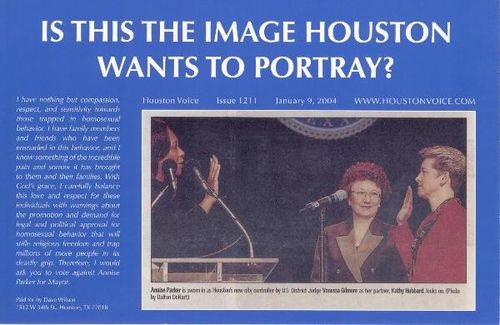 Dave Wilson, the conservative anti-gay activist behind the homophobic flyer campaign against Houston Mayor Annise Parker during her campaign has announced he is running for Harris County commissioner, as a Democrat, the Houston Chronicle reports: 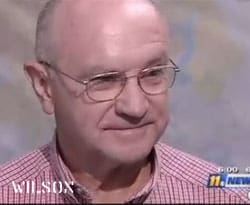 Wilson — who once
hosted a fund-raiser for Republican incumbent Jerry Eversole — believes
Eversole will resign his seat as a result of a corruption investigation
by the FBI, and he wants voters, not the county Republican Party or
county judge, to pick his successor.

County election
records indicate that Wilson, 63, has voted in eight GOP primary and
runoff elections since 1995, but never in a Democratic election.

Harris County
Democratic Party Gerry Birnberg accused Wilson and the Republican Party
of fraud. Not only is Wilson not a Democrat, Birnberg said, but the
candidate sent a representative who signed in as Wilson and allowed
himself to be introduced as Wilson to a roomful of applauding Democrats.

Birnberg said he
did not realize when Wilson's representative filed his candidacy papers
that it was the same Wilson who sent out 35,000 fliers in November
opposing Annise Parker for mayor, in part, because of her sexual
orientation.

“We would have recruited a placeholder so we could keep this charlatan out of the race,” Birnberg said.

He said local Republicans should be ashamed to “stoop to such fraudulent chicanery.”

Harris County Republican Party Chairman Jared Woodfill said, “We had absolutely nothing to do with it.”