Judge Vaughn Walker has ruled regarding the televising of the federal challenge to Prop 8 scheduled to begin Monday. Cameras will be allowed, but not live. They'll be court-operated and video of the proceedings will be posted online: 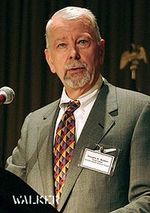 "Chief U.S. District Judge
Vaughn Walker approved court-operated cameras in his courtroom for
delayed release on YouTube, but rejected a bid by media organizations
to televise the proceedings themselves for live broadcast. Walker,
by approving some broadcast of the Proposition 8 trial, became the
first federal judge in the West to make use of an experimental program
put in place recently by the 9th Circuit Judicial Council, which sets
policy for federal courts in nine states, including California. Walker
rejected the arguments of Proposition 8's defenders, who opposed any
broadcast of the proceedings outside the San Francisco federal
building. It was not clear from Walker's remarks how long the delay
would be for the video to be posted on the Internet."

The Courage Campaign released a statement following this news:

"The Courage Campaign Institute today called the federal trial
ruling allowing a publicly-accessible webcast of the Proposition 8 case
'halfway to a fair hearing.'  … 'This precedent-setting ruling is an important first step and it is halfway to
a fair hearing,' said Courage Campaign Institute Chair Rick Jacobs.  'We now ask the United States Court of Appeals for the 9th Circuit to take the
next step toward transparent jurisprudence by allowing a press camera in the
courtroom so all Americans can see and hear as a fundamental issue of civil
rights is litigated,' Jacobs said. 'Overruling this halfway measure would be a
travesty for openess and accountability.' More than 82,000 Americans have already signed a Courage Campaign
Institute/CREDO Action letter calling for a publicly accessible trial. Courage
and CREDO will present these and newly gathered petitions to the court by the
end of the judge's comment period on Friday."