A few updates on the Prop 8 trial, which the NYT reports opened with "sharp words" from Judge Walker. The trial is expected to reach the Supreme Court, but not before what's estimated to be three weeks of wide-ranging testimony from a variety of sources.

The Mercury News has some good coverage of the day's events, in a timeline. 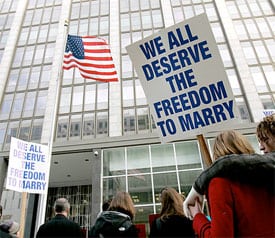 Among other things, Walker asked how Proposition 8 could be discriminatory since California already allows domestic partnerships that carry the same rights and benefits of marriage.

"If California would simply get out of the marriage business and classify everyone as a domestic partnership, would that solve the problem?" the judge asked.

Former U.S. Solicitor General Theodore Olson,who represent two same-sex couples who filed the suit, answered that hedid not think such a move would be politically feasible.

"Isuspect the people of California would not want to abandon therelationship that the proponents of Proposition 8 spent a tremendousamount of resources describing as important to people, and so importantit must be reserved for opposite-sex couples," he said.

Olson quoted the U.S. Supreme Court's own lofty description of matrimony to demonstrate what his clients were being denied.

"Inthe words of the highest court in the land, marriage is the mostimportant relationship in life and of fundamental importance to allindividuals," Olson told a courtroom packed with witnesses, reportersand members of the public.

Leff adds: "Attorney Charles Cooper, who is representing Proposition 8 sponsors, said it's too difficult to know the impact of gay marriage on traditional marriage because the practice is still so new.Only five states have opened the institution to same-sex couples, and three of them had them imposed on them by judges, he said.' While the people of California have been steadfast in their defense of marriage, they have also been generous in their extending of the rights and benefits and protections of marriage to the gay and lesbian population,' Cooper said.He also noted that President Barack Obama doesn't support legalizing gay marriage, a remark that prompted Judge Walker to note that Obama's own parents would not have been allowed to get married in some states before the Supreme Court overturned state bans on interracial marriage in 1967."That indicates there is quite a change in individuals' entitlement to enter the institution" of marriage, Walker said."

Much more at her story… 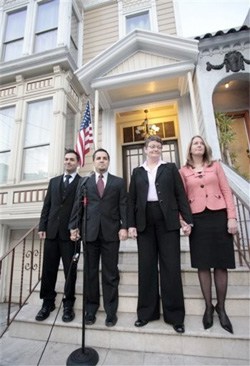 Karen Ocamb has a report on the first half of the day: "Charles Cooper for the defense seemed all over the place – arguing what we’ve heard often before – that marriage is historically and culturally been defined as between a man and a woman for the purposes of procreation and a stable society. Judge Walker asked how same sex marriages effected heterosexual marriages – and he says it does because it 'de-institutionalizes' the institution. Again, more on this later. I don’t think Cooper did well – and it turns out that three more of their witnesses dropped out this morning, per Stewart.This morning’s testimony was basically by the gay male plaintiffs – Paul Katami and Jeff Zarrillo. Jeff went first and was emotional at several points talking about the difficulty coming out and being categorized as a second class citizen. No questions from Cooper."

The L.A. Times reports on testimony by the two plaintiffs who brought the suit:

"Jeffrey Zarrillo, who has been in a relationship with another man for nearly nine years, testified that he wanted to marry Paul Katami. 'He is the love of my life. I love him probably more than I love myself. I would do anything for him,' Zarrillo said.Zarrillo said others would view his and Katami's relationship differently if they were married. 'It says to them, 'These individuals are serious, these individuals are committed to each other,'' he testified, his voice breaking often as he spoke."

About 100 people demonstrated outside the courthouse this morning as the trial began.

Watch the AP's video report, which features interviews with activist Cleve Jones, Equality California's Geoff Kors, and others outside the courthouse, AFTER THE JUMP…